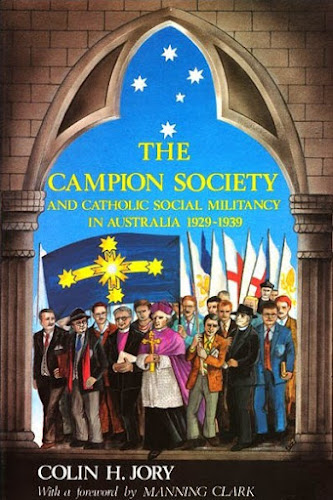 
Other and more serious difficulties were encountered when ANSCA sought to launch a Young Christian Workers' Movement, which was to be an Australian equivalent of the Belgian/French Jeunesse Ouvriere Chretienne (or J.O.C.). This plan, which had been endorsed by the February Conference of Catholic Action Organisers, involved the establishment of a single national Catholic Action movement for young working-class males in the 14-25 year age group. The architect of the scheme was Kevin Kelly, who in November 1939 was appointed by the Belgian J.O.C. Headquarters as the official Australian representative of the world Jocist movement.26 The trouble arose from the fact that in Victoria the field of organised Catholic youth activity was already occupied by two well-functioning bodies, the Catholic Boys' Legion and the Catholic Young Men's Society.

Kelly's plan envisaged the eventual dissolution of both these existing organisations, and the assimilation of their membership and their functions into the Y.C.W. His reasons for this were set out in an A.C.T.S. pamphlet which he edited. Young Christian Workers (31 July 1939), wherein he equated the C.Y.M.S. with a Belgian Catholic youth organisation which had been taken over and re-constituted by the Jocists. The implication of the analogy was that the C.Y.M.S. could not be made into an effective Catholic Action body without being totally re-formed, as it was too sport- and socially- orientated; too inward-looking and implicitly defensive; and too set in its traditions and structures, to serve as an efficient vehicle of the militant social apostolate.17 However, it was essential, in the view of Kelly and of ANSCA, that the proposed Y.C.W. take over, firstly, the best potential leaders from within the C.B.L. and the C.Y.M.S.; and at a later date, the mass working- class membership of both. It needed the leaders to make up its trained, militant elite; and it needed the masses in order to become a popular movement in its own right, capable of transforming society from the factory floor upwards. The Y.C.W., by its very nature, had to displace or take over the other two bodies before it could hope to prosper.

During 1937 Kelly had gained a firm foot-hold within the Catholic Boys' Legion. Dave Nelson, the President, proved a valuable ally; and he in turn transmitted an enthusiasm for Jocist methods to Father Francis Lombard, a recently-ordained curate who operated a Catholic boys' club in the parish of Northcote." Furthermore, a J.O.C. 'ginger group' of Kelly's colleagues had been working systematically within the Legion to promote the Jocist scheme." In 1938, as a result of their efforts, 'nearly all' the members of the Boys' Legion Committee came to agree 'that discussion groups along J.O.C. lines should be established in each boys' club'. However, this proved too much for Father Lanigan, who at the end of May dismissed all the lay members from the Committee, and forbad the use of the J.O.C. prayer in meetings of associated clubs. Lanigan regarded the Legion as his own creation, and as his by right to command. His own vision of its functions did not extend beyond sporting and social activities; and he had apparently come to suspect that the Catholic Action enthusiasts were conspiring to take effective control of the organisation away from him. His purge of the Committee did not eradicate the Jocist influence within the Legion, but it did greatly restrict it.

In the short term, the C.B.L. setback was a major blow to Kelly's Y.C.W. plans. An alternative source of access to the 14-18 year age group existed in the Catholic Youth Movement, and in an organisation which succeeded it. the 'League of Catholic Youth'. The latter was an explicitly Catholic Action body which was formally inaugurated on 26 February 1939 'to combine and co-ordinate over fifty groups of Catholic young men and women, hitherto carrying on their activities independently'.,l However, while these discussion group federations could furnish the Y.C.W. with some of its leaders, they could not provide it with a mass basis. Only the C.B.L. and the C.Y.M.S. could do that.

The C.Y.M.S., for its part, had no intention of going into extinction, whatever the desires of ANSCA. It bad received fair warning of the forthcoming challenge to its existence in a C.Y.M.S./Campion correspondence controversy which had broken out in the Advocate in December 1936. The issue of contention was whether or not the C.Y.M.S. could become an integral part of Australian Catholic Action when that movement was formally Inaugurated. Campion writers had asserted that the Young Men's Society was inherently unsuitable as a framework for a Catholic Action organisation: C.Y.M.S. supporters had insisted that this was not the case."

To the C.Y.M.S. leaders the controversy revealed that, in the Campion perspective, their Society was expendable. Adding to the danger was the fact that the established C.Y.M.S./Campion joint discussion groups tended to regard themselves simply as Campion branches." Clearly, if the Young Men's Society were to survive as a vital movement, it would have to construct its own study-group network, and break all dependence on the Campion Society in this regard.

Already, in August 1936, a C.Y.M.S. Catholic Action Sub-Committee had been formed to report on the Society's potential role in the lay apostolate movement. Now, in consequence of both the Campion challenge and the Spanish War dispute, its deliberations acquired a new significance and a new note of urgency. The branches were combed for suitable study-group leaders; and in mid-1937, at a meeting of 'thirty or forty enthusiasts', the 'C.Y.M.S. Legion' was brought into being.35

The primary functions of the Legion were to encourage the establishment of study-groups in association with existing C.Y.M.S. branches, and to see to the training of their leaders. Standish Michael Keon, an outstanding C.Y.M.S. athlete and debater, was appointed its Secretary. By March 1938 the Legion had study-groups operating in connection with twenty-four of the forty metropolitan C.Y.M.S. branches, and with six of the sixty country branches, at a time when total Society membership was in the vicinity of 5,00c).37 The success of the groups is attested to by the fact that eighteen months later their numbers in Melbourne remained unchanged.31

ANSCA was pleased at the progress of the C.Y.M.S. Legion,39 seeing it as an excellent source of future Y.C.W. leaders. Furthermore, Kevin Kelly and other Campions assisted it by giving lectures when called upon.40 They obviously failed to recognise it as a potential threat to their long-term plans.

The inevitable clash between the C.Y.M.S. and ANSCA finally came in mid-1939. The Secretariat, having decided that the time had arrived 'to draw out the best members [of the C.Y.M.S.] and to make them into the nucleus of a J.O.C. type of Movement',41 invited the C.Y.M.S. General President, David Sherriff, and the General Secretary, Reginald Hodgkinson, to attend at its offices.41 The Directors assumed that neither these two, nor the Board of Management, would have any objection to handing over their best Legion men to ANSCA, to be trained as leaders for a movement which was intended eventually to replace the Young Men's Society. The naivety of this assumption reflected the long-standing inability of the Campion leaders to recognise the other Society as being anything more unique, or more important, than a debating and sporting union. Needless to say, ANSCA's request was politely but firmly refuted. The Secretariat was at last forced to acknowledge belatedly, and somewhat grudgingly, that the C.Y.M.S. 'gave one of the best examples of the loyalty which an organisation, despite methods which even its members admit to be imperfect, can arouse in those same members'.43

This decisive rebuff forced ANSCA to shelve for the time being its schemes for an Australian Y.C.W. Archbishop Mannix was consulted on the dispute, but, having for twenty-six years maintained a relationship of mutual respect and loyalty with his Young Men's Society,44 he was not prepared now to sanction its dissolution. ANSCA had no option but to revise its plans, and to allow for two young men's Catholic Action movements being formed in Victoria, one based on the C.B.L. for boys 14-18 years, and the other on the C.Y.M.S. for young men aged 18-30.